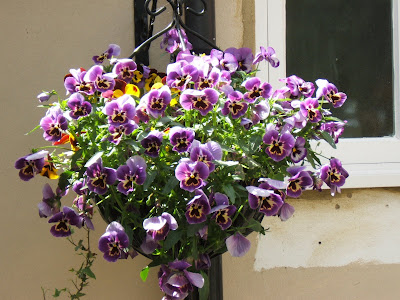 Hanging basket of pansies outside the back door. I'm told that the name pansy comes from the French 'pensee' meaning thoughtful because the French think that the little faces in the centre of these flowers look thoughtful. Typical French I'd say. The faces in the middle of these flowers look like grumpy old men, all with 'Old Bill' First World War moustaches. Still they brighten the garden up. 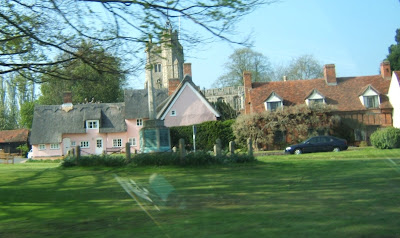 Snapshot taken last Friday from car whilst travelling through Cavendish. 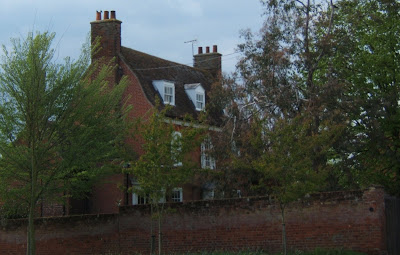 And finally a very fine eighteenth century (Queen Ann ?) house, set back from the street. All the houses I have illustrated in the last six blogs - entitled Tuesday- are all in the same street. There are many more fine, medieval (and onwards) houses in this street, which is used regularly by heavy traffic. There is in fact a weight limit of seven and a half tons on vehicles using this street, but this is a law that is flouted many times daily and with complete impunity. That such a national treasure of a street should be mistreated in this manner is nothing short of a national disgrace. 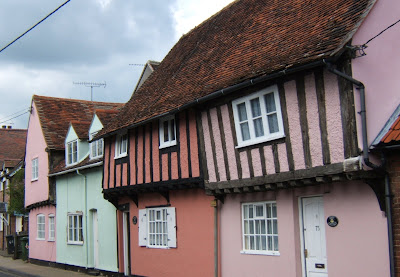 These were all probably weaver's cottages originally, and are all of XIVth century date. 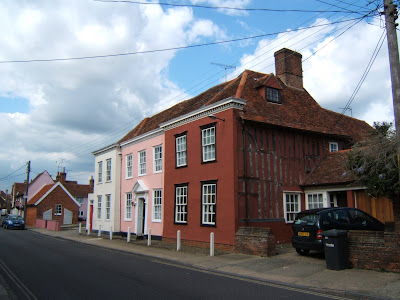 This very fine old property (now three houses) had a new facade added in about 1700, but as you can see by the end wall is in fact an older building than the facade would indicate. 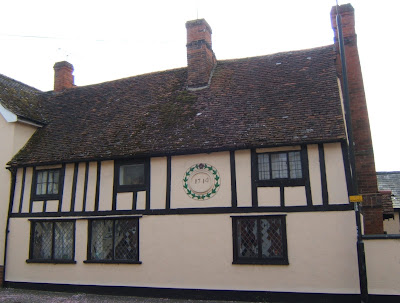 Given the date on the front this house was either very traditionally built in 1714, or was an older house which was totally refurbished in 1714. 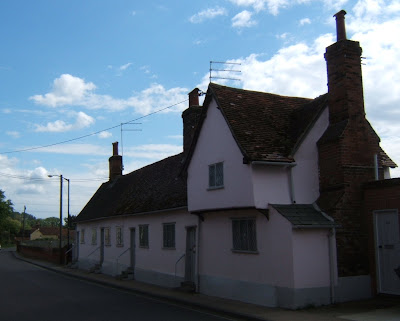 These are a row of old Almshouses. They were built as almshouses in 1555, and, in a sense, still are almhouses, in that they are let (I think by the Council these days), at reasonable rents, to those in need of them. 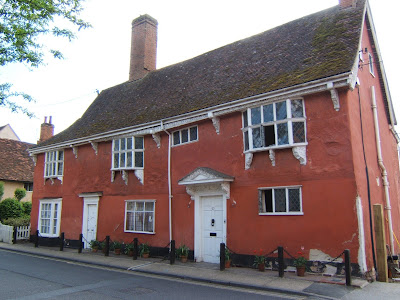 I think this is one of my favourite houses. It's not very early (as Suffolk houses go), there's a date in among all the carving and pargetting of 1653. The house's name is the Flying Chariot. 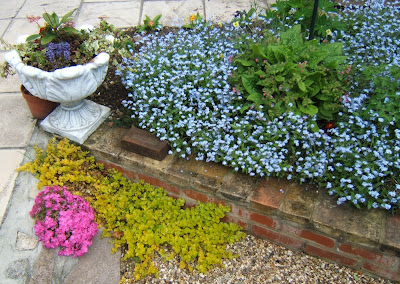 A colourful corner of our garden. If a garden is very small, as ours is, then great care has to be taken as to what goes in it, and I'm not sure that we haven't overdone the forget-me-nots. Still, there's always next year. 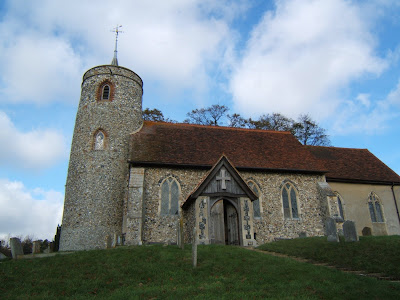 Photo of Aldham Church, a few miles from us. The round tower was built just over a thousand years ago as a defence against marauding Danes, and the rest of the Church is a later addition, built at some time in the 1200s or 1300s.

Ann's away overnight with her mother, so I'm sitting up late doing odd jobs, easy repair work, and blogging. Must knock off now though and get meself a meal (cold chicken and fry up, I think) then bed. Goodnight all. 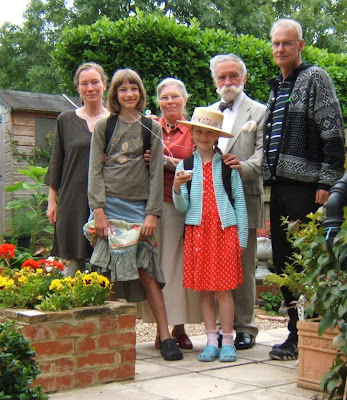 Just been flicking back through photoes and this was taken last July when we got together to celebrate Gran's hundred years. It shows Ruth, Lasse, and the girls, Ann and meself.

Got a busy day ahead of us. Hopefully time for one quick game of scrabble this afternoon, then across to the Church, where I'm stewarding at the art exhibition, and Ann's helping with the refreshments. This works well, as they usually put me on the welcoming, entry ticket and catalogue counter at the door, and it also means that Ann regularly supplies me with cups of tea. Just got time now for a couple of hours in the workshop before lunch. More later, perhaps. Cheers, Mike. 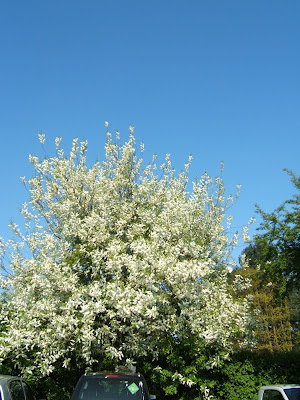 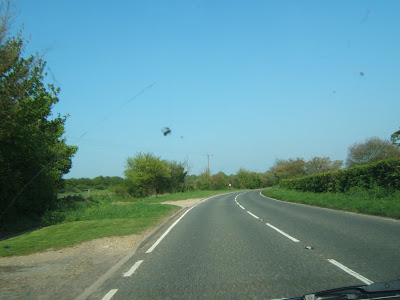 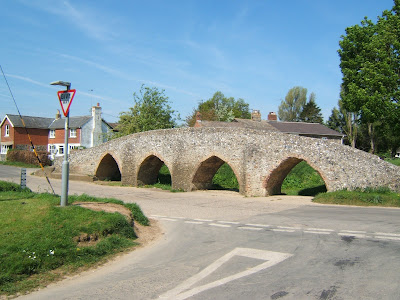 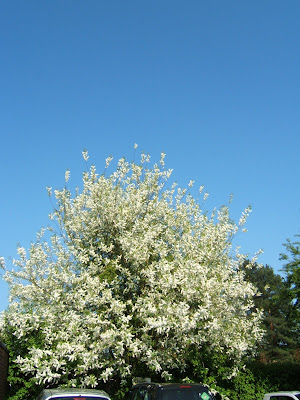 I don't quite know how I've managed to do this. In the past whenever I've tried to get this computer to put more than one photo on my blog the machine has laid its ears back, dug its hooves in and refused to cooperate. Now when I tried to get it to publish a photo of Moulton pack horse bridge, it publishes the wrong one, and three other photoes not remotely connected with what I asked it to do!!!!!!! However you get the idea of the bridge. It's a XIVth / XVth century pack horse bridge which used to carry goods traffic between Bury St. Edmund's and Cambridge over the river Kennet. There was also a ford beside the bridge for wagons and carts.
This morning we set out to go first to Gazely where I delivered and set up a clock I'd been repairing. Our friend the owner was out at a pottery class, but her son James and his wife Freja had stayed in (they and their three daughters share a large house with Mama). Freja very kindly made coffee for us whilst I set the clock in beat. Then on to Cambridge, where we had lunch and went on to Addenbrookes hospital where we saw Ann's sister-in-law Erica, who was very poorly but very much herself. She explained that she found talking painful and very tiring, but asked us to talk to her and she would enjoy listening and could nod or shake her head when she felt she would like to give an opinion. Gentle conversation for a while, then by request I read to Erica for ten minutes or so. Also told her of an incident that had occurred on our way up to her. We got into a lift on the ground floor of the hospital and were joined almost immediately by a nurse and a young man (well, in his early forties I should think) in 'scrubs'. As he was carrying a gas cylinder I asked him which floor he required, and he answered by saying 'It's Mr. Horner, isn't it?'. I admitted the charge and he said that about twenty five years ago I had shown him how a crossbow worked and had allowed him to fire a brass barrelled blunderbuss, which he had never forgotten. He told me his name, and I tried to be polite, but it must have been clear that I had no real memory of the incident. After I'd cudgelled my memory for a while the retrieval system started to work and I did in fact remember the incident and the bloke. I then asked a friendly (and helpful) nurse about him and she told me he was the anaesthetist on the floor below and offered to take a note to him. I scribbled an apology, and explained that I had remembered the incident, on the back of a business card, and the nurse took it off to him so I hope he will get in touch. What a very good memory he must have to be able to pull my name out of it at such short notice. Got home about 5pm. Ann's now having a short kip (I hope) as we are going to the preview of the annual Art Exhibition in St. Mary's Church at 8p.m. More later perhaps, if I'm still awake when we return.

Just got back from a trip to London. Went up by train yesterday, and viewed Bonham's auction. Stayed over at Lizzie's. This morning we went by 'bus from Chiswich back to Knightsbridge for the auction. It was a lovely sunny April morning, with just enough light breeze to keep it from being too hot. From the front seat of the top deck of a London 'bus Hyde Park looked stunning ! Bluebells in full bloom between the trees, which are all in full green leaf. The horse chestnut 'candles' are in full flower. We got off the 'bus near Hyde Park corner and walked through to Montpelier Street. When we walked through Montpelier Square (there is a small private park in the middle of the Square with many mature trees) we saw that one of the regency houses had a cascade of wysteria, in flower, pouring down its facade - all four stories. There is a coffee shop opposite Bonham's with seats outside, and we have used it a good deal today. Been a good day, and we're about ready for bed. So - Goodnight all.

P.s. When I talk of the 'Regency' houses in Montpelier Square, they may be early Victorian. Circa 1840, I should think. Must be accurate. Cheers, Mike.
Posted by Unknown at 20:30 2 comments: 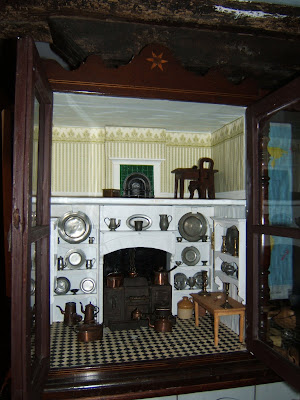 And finally, I thought you might like to see a shot of the toy kitchen (with bedroom above) before it's returned to its owner.
Goodnight all. God bless you. 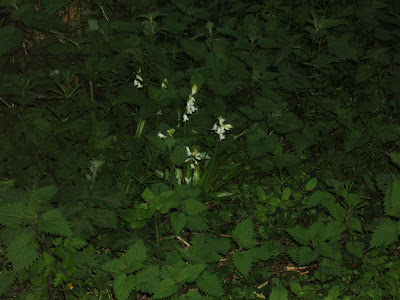 Noticed several clumps of these white flowers this evening. They are, I think a variant of the bluebell, but earlier than I'd expect to see bluebells in full flower. 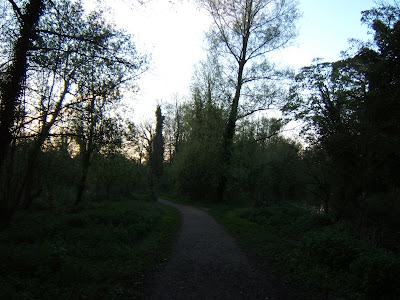 The river walk in the dusk. The trees and shrubs are leafing up nicely now. 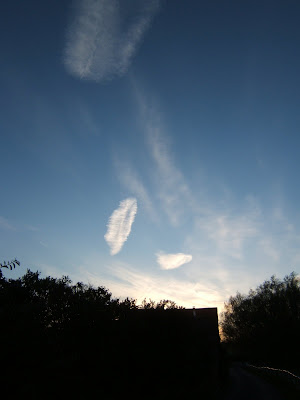 Just back from a walk along the river. Tried to take a shot or so of the sky, to get some of the odd, feather shaped clouds. 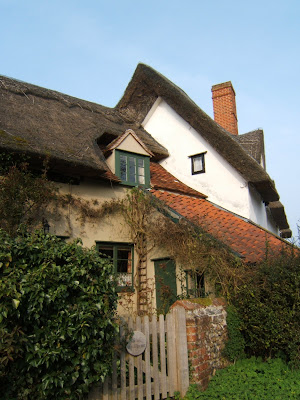 Cottages in Little Waldingfield, taken about a fortnight ago.

Being a Saturday afternoon I'm just back from scrabble club. Phyllis won the first two games, though the second was a very close run game, with fifteen points (top to bottom) between the four of us. I won the third game, but only because I managed to fit in a seven letter word about halfway through the game. Cup of tea time, I think. More later perhaps. 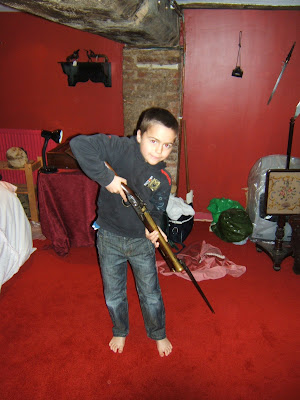 Guy demonstrating the correct technique of dealing with damaged highwayman who is still kicking after having coaching blunderbuss discharged at him. (Prod him with the spring bayonet on the blunderbuss until he stops kicking, of course.) Please do not be too concerned about this. I doubt if Guy will ever have to put this knowlege into practice as highwaymen are now almost extinct; (so would you be almost extinct if shot with a blunderbuss and then prodded with the bayonet). 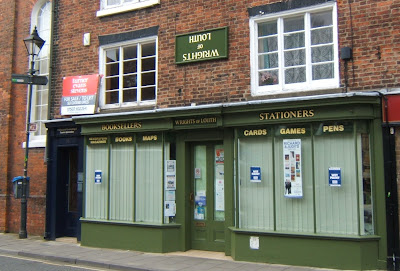 I don't know why they call us Silly Suffolk when things like this can be seen in Lincolnshire! 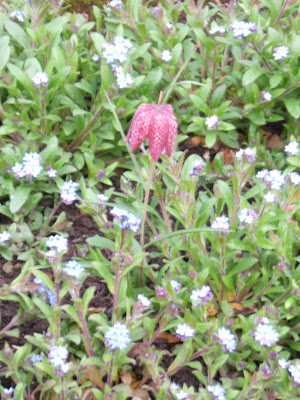 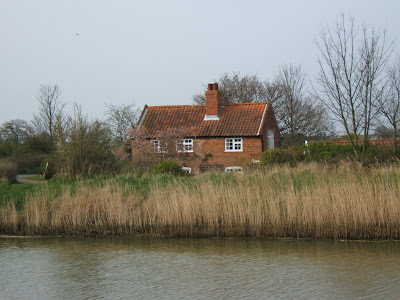 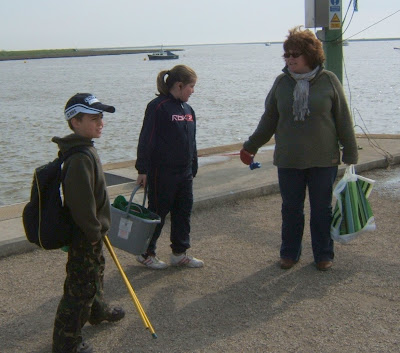 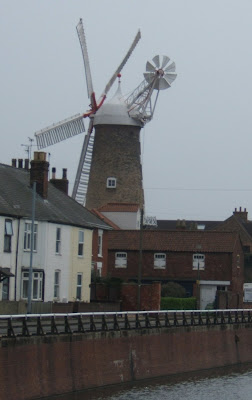 Snapshot of a fine,five sailed, tower mill, taken on our way home on Tuesday, in Boston, Lincolnshire. 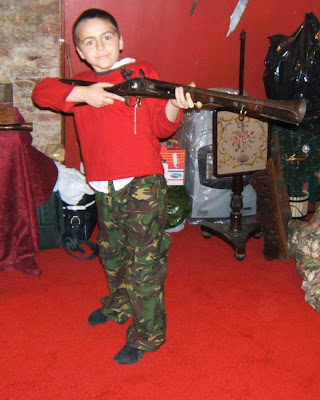 Backtracking here a bit, I'm afraid. This is a photo of grandson Guy, taken last Thursday evening, when putting an East India Company blunderbuss (dated 1817) through its paces. Bit long in the stock for him, and if it had been loaded it would have knocked him flat on his back. Must close now, bedtime, and I've still got some shoes to clean. Goodnight all.