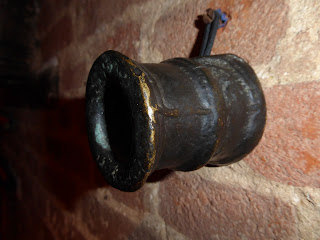 Small (but probably very  effective) alarm gun, which I have been working on lately, with assistance of Grand daughter Lucy who has been staying over the last few days. I wanted to mount the gun on a wall without marking the metal, and Luce (who has the gift of seeing the easy way of  doing things (if or when there is an easy way) spotted the one we used here immediately. which was tying the barrel to the wall with a leather thong or bootlace - very simple and easy , and with  a certain amount of 'give' to it. Works well and demonstrates that the simple way of doing a thing is usually the best.
The barrel is three inches long, with a one and a half inch bore. I think  it would have been fired with  match- cord, or a red hot iron. 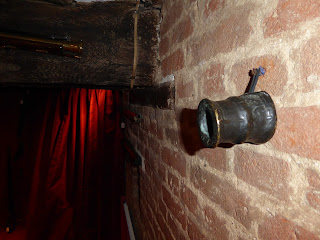 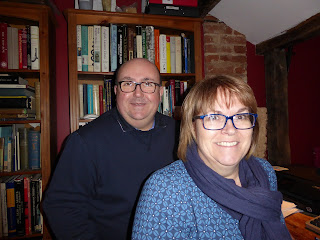 The above photograph is of senior daughter Sarah and her  husband Mikey. It was taken during the weekend of 19/21 January, which they spent with us. It was taken in my  cellar. My 'library' consists of two parts -  the  passageway  at the top of the cellar steps (which contains books for reading), and the 'office' part of  my  cellar - which contains my 'reference library' - books on  clocks, guns, weaponry and early metal-ware. I would be lost without  it. Grand daughter Lucy and I are in the  reference part of  the library now, writing (and correcting) a blog entry, as you can see. We are being summoned upstairs for lunch by Ann. Will  complete this later.
It is now 'later'  so will publish :-

A regular visitor, a friend of Ann's. Last year - spring, summer; this  character raised FOUR  broods . (I'm not at all sure that they were all by the same lady blackbird,  although  Ann tells me that she  is sure he is a high principled bird) 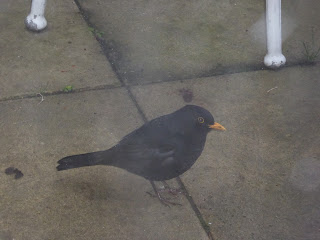 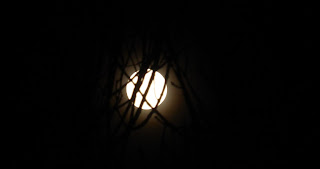 The above is  a  photo of 'the blue moon' which I took  the  other evening - Don't we live in a wonderrful world these days ?
Posted by Mike at 11:28 4 comments: