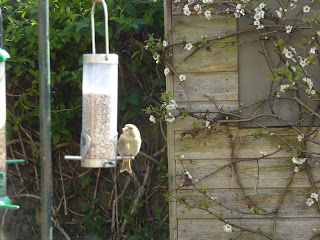 This morning, about coffee time (our friend Helga was taking coffee with us), when I had occasion to leap up and take the above photo of a young greenfinch. These seem to have become fairly rare over the last year or so, but this one has been coming to the bird feeder over the last couple of days, and finally allowed me to photograph him. 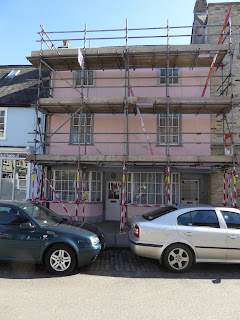 This afternoon, we walked into town to do one or two jobs that had become necessary, and we were pleased to see that work had finally begun on our friend Hilary's house (the pink, bescaffolded house in the above photograph).  It is a very old house - Hilary has a trick, when showing people around her house of saying "This is the new part; it's around five hundred years old."  Then, on entering into what she calls the 'older part', saying "Now this bit is rather earlier. Well, another two hundred years or so older than the new part I've just been showing you".  For the last year or more Hilary has been battling with the local council for planning permission to put up scaffolding on the front of the house, where large areas of the plastered facade have been threatening to tumble into the street, and it looks as if planning permission for the scaffolding must have been finally granted; and only just in time, too. So now the necessary repairs can be started. 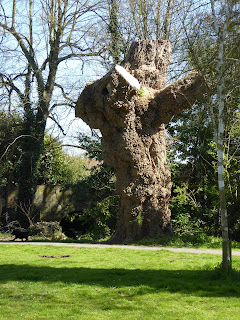 Walked home via the river walk. Not long ago there were three black poplars in this immediate area of river bank. Now only this one is left, and, as you can see, it has recently been very heavily pollarded. There are very few black poplars left in the east of  England; so I hope the town council know what they're doing. There are signs of it having been pollarded a good deal in the past, and also signs of a few green shoots already showing in the upper part of the tree, so it may be alright (???)  Hope so anyway.
Must walk round that way rather more often. Will keep you in touch.

P.s. Ann has just 'phoned Hilary, who says that it's THREE years, not one, that she has been trying to get planning permission  for scaffolding  to be erected on her home, so that the necessary repairs can be done.  Like many of the houses in town (including ours) Hilary's home is Grade 2 listed, so it's hard  to see why the council make it so difficult for us to keep our homes in good repair.
Posted by Unknown at 18:38 4 comments: 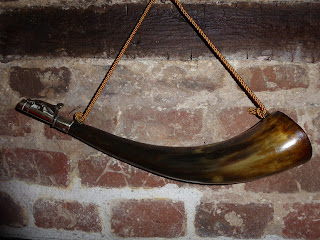 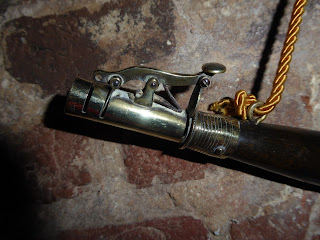 Was going to do a long and rambling blog this evening, but have run out of time; so will have to do a fairly quick  'Mystery Object',  two photographs of which are shown. The upper photo shows the whole object (it is one foot, three inches in length, although I have seen even longer ones). They were made for a quite specific purpose, I'm told. The lower photograph shows the mechanism of the device. Please have a guess at where they were made, roughly when, and the 'quite specific' purpose for which they were made.
Will now stagger off to bed, so  Goodnight to all, if any, readers.
Posted by Unknown at 21:50 16 comments: 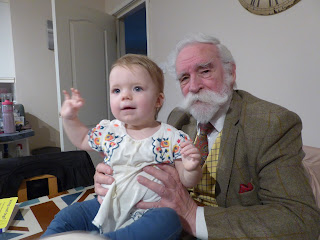 Been a busy week. On Monday motored over to Leicestershire, and spent a coupe of days with Crowbard, and his wife Judy, whose cooking and hospitality was, as usual, first rate.
On Wednesday we drove on to the Milton Keynes area, and spent a day with senior daughter Sarah and her family. The top photograph shows meself and our Great Granddaughter, Astrid, chatting. She is a contented little soul, and although she can't talk- she hasn't realised that fact, is convinced she is a prolific and accurate speaker, and spends a lot of time in verbal communication with whoever is next to her. This suits her great grandfather (meself) very well, being rather deaf, and we chat away quite happily together. 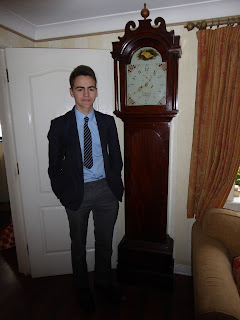 Above photo is of Grandson Guy, in school uniform, who has charge of the above Norfolk grandfather clock . Guy suspects there is an incipient minor fault in the winding mechanism. He is quite right - the click spring in the ratchet on the great wheel  of the striking  train needs to be tensioned up a little. Next time I'll try and remember to take a box of tools with me, and we'll perform kitchen table surgery on said click spring. A fairly easy job, but getting at it is the difficult bit. 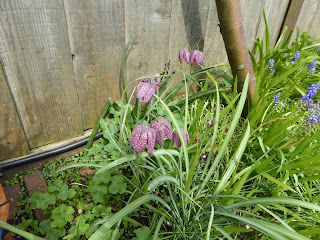 Set out for home at nine ten ack emma this morning, journey took just under two hours. The garden is looking well, and, as you can see,  the snake's head fritillary is looking very well. Got a good deal of work to do though, before the middle of June, when we're booked to take part in the exhibition of 'Secret Gardens of Highdale'  still, potentially it's looking well, and we've got a couple of months to clean and polish things up a bit.  Quite looking forward to it.
Posted by Unknown at 21:07 5 comments: 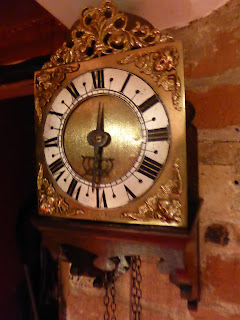 Been a very busy week. The two photographs are of a small clock  (six inch square dial) that I've purchased, restored, and resold (to a dealer) all in about the last  fortnight.  It's originally a loop and spurs wall clock, which has been later mounted on a small oak bracket. It was made somewhere around 1690 - 1720, by Roger Moore, of Ipswich, who was the founder of a distinguished family of East Anglian clockmakers. The best known of them was Thomas Moore, also of Ipswich, who was this chap's son. 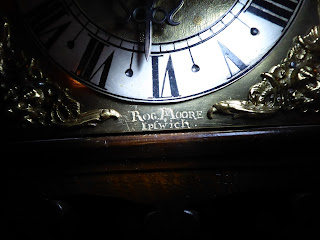 This photograph shows the name Roger Moore, Ipswich, engraved along the bottom of the clock's brass  dial.  It was rather a temptation to keep this clock, but there - you can't keep them all, or the place begins to look like a cross between a junk shop and a museum.

I really started to type this blog entry to warn my readers that I am once again having problems with the computer. It keeps telling me how many messages it has taken in on my behalf, then refusing to give them up to me.  I think the number it's withholding at the moment is something like sixty three, but it keeps varying, so if you've written to me and not got a reply or an acknowledgement, it simply means that the computer has retained it and is growling at me whenever I attempt to make it give them up. I shall have to get an expert in to beat the machine up and persuade it to behave.

In the meantime, please bear with  me. 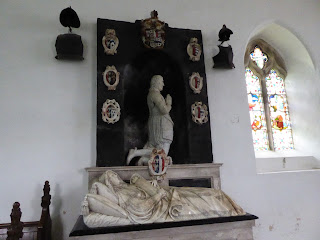 These three photographs are all of monuments in Bramfield Church, near Halesworth in Suffolk, and are at the special request of my brother, who blogs as Crowbard. The first two are a monument to three members of the Coke family, who lived at Bramfield Hall (the house behind the crinkle crankle wall, illustrated earlier this week). The monument was erected in the early part of the 1600s. 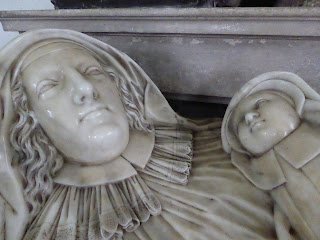 The photograph above is a close up of part of the above monument to the Coke family. It is a lovely alabaster sculpture of mother and tiny daughter. It is very touching monument. 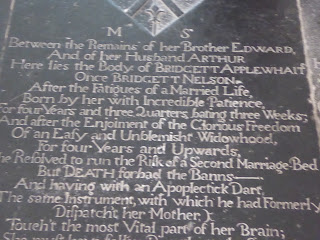 The above monument is, I think, of slate, much the same period as the Coke monument (or a little later). It is a monument to Bridgett Applewhaite, and has, to our way of thinking some odd ideas. One of them is worded as 'the enjoyment of the glorious freedom of an easy and unblemished widowhood' which seems to be the only cheerful part of the whole thing.

Don't trip over the long S, or rather esses in this one, they are written as fs, and can be a bit difconcerting.

Being called up to supper now, so must leave this - The church at Bramfield is worth the journey.
Posted by Unknown at 17:59 10 comments: