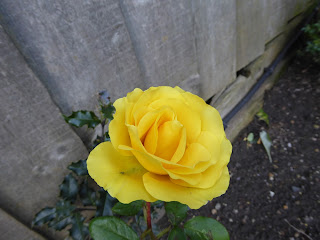 This really is the last rose of summer (last summer that is).  Been watching it as a tiny bud since a week or so before Christmas. Realised this morning that it is now in full flower. The garden has snowdrops in profusion, a few daffs, four different colours of hellebore (Christmas Rose) one or two crocii, a quince bush(japonica) full of white flowers, and one last rose illustrated above. Our small garden is now giving us flowers the  year round!

P.s. Roses in flower through from April to January.
Posted by Unknown at 18:27 2 comments: 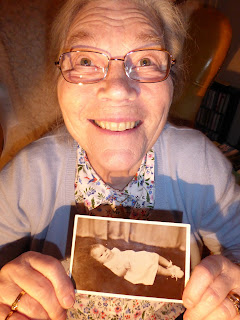 This is a sort of continuation of yesterday's blog entry. Above photo shows Ann holding up a photograph of herself as a baby. 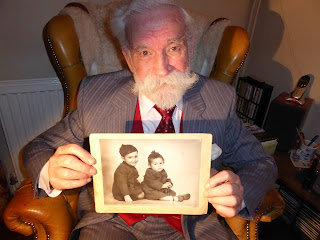 Above photo is of meself  holding a seventy year old photo of meself (to left of photograph) and Crowbard, to the right.
Posted by Unknown at 17:52 7 comments: 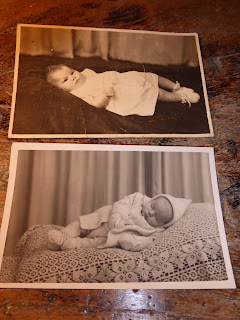 No, these are not 'Mystery Objects'. Just been sorting through some old photos, and came across these two. If anyone thinks they recognise them (and I think my offspring might if they  see this blog entry)  when do you think they were taken?

Been out to lunch today with friend Heather. When Heather 'phoned a week or two ago to invite us, she asked Ann if she thought I'd mind being the only bloke.  Ann said she thought I wouldn't, and how right she was. I don't think any man in his right mind would mind that. Anyway, in the end, the score turned out to be six ladies and meself.  A good time was had by all (except that I broke a wine glass - very embarassing!)    Hostess Heather behaved perfectly though, as she always does, bless her- that reads as if I break Heather's wineglasses regularly, and I didn't mean that at all, this was the first time I can remember doing it. Must try not to let it become a habit.

Ann's just gone up, so I suppose I'd better join her.
Good Night, everyone.
Posted by Unknown at 21:31 7 comments: 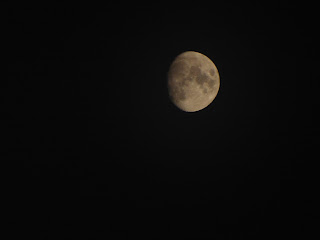 At about ten o'clock yesterday evening, whilst putting the car away, I realised there was a lovely clear moon. On Christmas day I realised there was a full moon and took a photograph of it which pleased me, which I thought was something of a fluke, so I got my camera and photographed last night's  moon, quite successfully I think, and using the same method as on Christmas day, except that I used the garden gate to keep the camera steady. 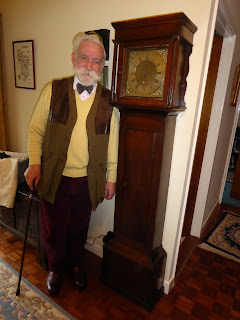 This morning we took the clock movement I illustrated on my previous blog back to its home, replaced it in its case, and set it going. The owner was pleased to have it back, and allowed Ann to photograph me with clock in situ,  to give some idea of what a tiny, but well proportioned clock it is.

On our way home we stopped and had lunch with friends Jill and Keith (fellow antique dealers). Bought from Keith a very nice eighteenth century brass chamber candlestick which needs a small amount of restoration (some of which I've done this evening - it's good to keep busy).

Good night everyone.
Posted by Unknown at 21:10 4 comments: 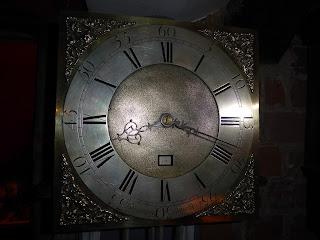 I don't seem to be working on clocks quite so much as I used, more on early guns and mechanical antiques generally; but this past weekend I've been working on the above long case clock movement. It's an English thirty hour clock about two hundred and fifty years old. I've had to find a clock rope of the correct size,  and splice it. It seems to be running nicely. I then had to dismantle, clean and polish the dial, resilver the chapter ring and, then relacquer  the dial. The movement lives in its original oak case, which is under six foot high, but as the dial (original to the case and movement) is only ten inches square (on a taller clock it would be a twelve inch square dial) it is a well proportioned neat little clock which I've know for ten years or so (since I sold it to its present owner in fact). It's been very satisfying to work on. 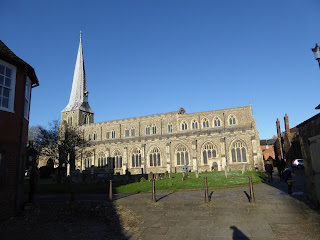 Walked into town yesterday morning to do a little shopping , and stopped for a coffee. As you can see from the above snapshot of Saint Mary's Church, it was a fine, sunny morning. It was cold though, with the wind in the North. Still, that doesn't matter too much at this time of year, as long as it's bright and sunny. 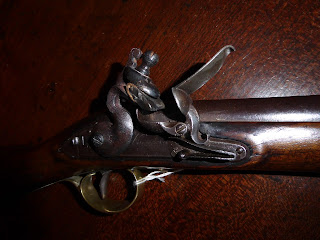 The two (above and below) photographs are both of a short, sturdy (16 inch barrel) coaching carbine which I bought in December at Bonham's, and have been cleaning and putting into good, working order since then. It was built around 1780, by Robert Wogdon, who was born in 1734, apprenticed to Edward Newton in Grantham, Lincolnshire in 1748, and then worked in London as a gunmaker until his death in 1813, at the age of 79. It has a very thick barrel, as can be seen from the next photograph.  The odd  thing is that Robert Wogdon is best remembered for making very high quality, sophisticated pairs of duelling pistols. 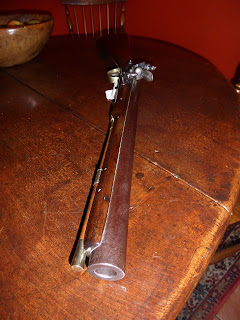 In view of that it is all the more surprising that he was still prepared to make this sort of solid, workmanlike  tool. 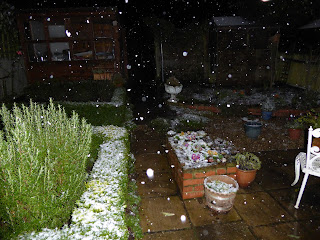 Quick snapshot of the first snow here for the last three winters, taken a few minutes ago.   Our garden using flash. Gives a fair idea of the weather.

Very short blog entry, but must record that just after midday yesterday , for perfectly good reasons which I won't go into because it would spoil the story, I found meself telephoning home to Ann :-
"Hello Darling. I'm in Felsham Post Office. Where aught I to be?" 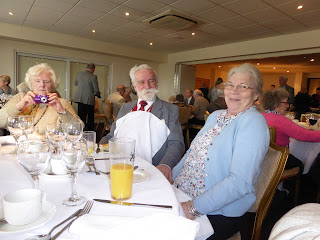 Above is a snapshot of Hilary, meself and Ann, taken by David Atkins. Hilary is, as you can see, at the same time taking a snapshot of David Atkins taking a snapshot of H..............Oh well, I'm sure you get the idea. We are in a nearby Golf Club, having the Christmas Lunch held annually by the Highdale Mothers' Union. I am there because all the Mothers are allowed (even expected) to take a partner. After all, if the mothers didn't have partners, they probably wouldn't have become mothers in the first place, although I'm told that it isn't altogether necessary to stick to the traditional methods these days, although I'm glad I'm a traditionalist. The meal is invariably traditional, though, and all the better for that- choice of roast beef or turkey, with all the tradional fixings. There were ten of us at our table, and we all know each other, so the conversation flowed like the wine. Although at one point I made a bit of a booboo, I'm afraid. The lady to Hilary's right is Ruth, who, although as well smitten in years as the rest of us, still continues (professionally) to do very complex (and quite exquisite) embroidery, so of course, I asked her what she'd been doing lately? "Oh", she said, "I'm afraid I've been spending rather too much time in Ladbroke's of late."  Now, this rather surprised me, because, although Ruth is a thoroughly sporting old darling, I wouldn't have thought she'd know one end of a horse from the other.
"Ah", I said, by way of giving her a let-out if she needed it "And have you broken even, or have the bookies skinned you?"   This seemed to stop her in her tracks, and it became obvious that she was floundering.
"Tell you what, Ruth," I said  "Let's start this conversation again. Where did you say you'd been spending a lot of time lately?"
"I said, I've been spending a lot of time in Addenbrooke's of late. What did you think I'd said?"

So I told her, and she joined in the general laugh, bless her.

There are times when it's quite fun being deaf.

Good night, Everyone.
Posted by Unknown at 20:55 5 comments: 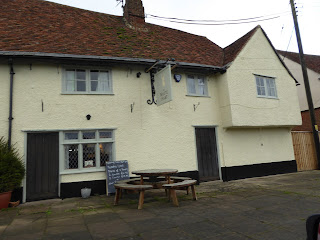 This morning had to go into town to our local opticians to have my annual eye check up. Got there a bit early so sat and chatted to various acquaintance, swapping 'what we did over Christmas' stories'. Very pleasant too. Then went in to see the eye specialist, and all went well, until he looked at the x ray pictures he'd taken of the back of my eyes, as a totally new service they provide. Then his face dropped a bit, and he spotted something he wasn't very happy with, and decided he'd like to take more x ray pictures and have a think about matters. Would tomorrow be alright ? he asked.
"Fraid not", I said. "I shall be in Long Melford all day tomorrow."
He couldn't make Thursday, so in the end we agreed on Friday morning.
"Now, don't worry about it" he said. "It's probably nothing much."  Those are the two silliest remarks (and the most frequent) that the medicos make.  Oh well, we'll see. Ann and I then decided (by way of cheering ourselves up) to go and have lunch in the above photographed hostelry, which has recently been opened by our friends Simon and Ros (the Cooks - yes, that is their surname, as well as their profession).  Went there soon after they opened, before Christmas,  and liked it. 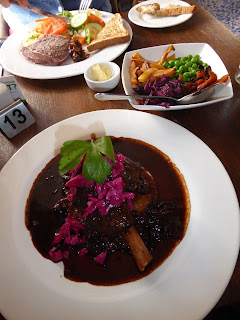 Given the season, we decided on a light lunch to try and restore the intake to average, and Ann had the top plateful in the above photo, a duck pate, of some sort, with salad; and I had the plateful nearest the camera. Can't remember what it was called, but it was in fact a lamb shank, with the plate of vegetables shown in the centre of the above picture. Very good they both were, too. 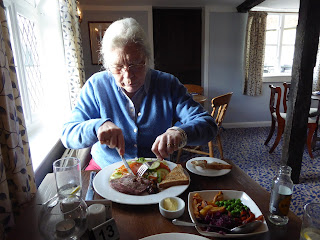 Above shows Ann getting stuck into her light lunch. In view of our resolution, we decided against pudding, but did have coffee.   If you ever come to Highdale, and feel peckish, I'd recommend the place. It's the White Hart, and it's the first hostelry you'll see after coming off the by-pass; but that's only if you've forgotten to let the Horners know you're coming,  so haven't arranged to share their family fodder first.

Got an early start ack emma, so will bid you all a very Good Night.