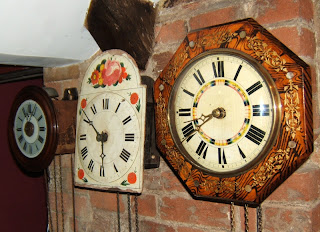 Been  a long day. Went to early service this morning at seven thirty. Got home about nine and changed into my workshop scruff. Spent the rest of the day in the workshop doing various odd jobs. Went well UNTIL- after a quick cuppa at five o'clock this afternoon,  came back downstairs and decided to do a necessary bit of adjustment to the clock on the right of the picture. All three are Black Forest Clocks, which was where they were made - all three of them with the English market in mind. They used to be called Dutch clocks, which is thought to be a corruption of 'Deutsch' clocks. The movements run in  wooden plates, and have wooden wheel arbours, and a painted wooden face and side doors. A good deal of the strike work is made of fairly malleable iron wire. They are not highly accurate pieces of horology, but in their day they were a clock that any farmhouse kitchen, and indeed a good many of the more prosperous cottagers, could afford. I've always rather liked them, in fact I was once referred to as the only clock-bloke in East Anglia who would touch Black Foresters, for  a great many horologist dislike them intensely. In fact an old friend of mine used to refer to them as 'those %^&!!!******* Black Forest toyshop clccks'. This afternoon I knew just what Peter meant! I spent (well - 'wasted' would be more the mot juste) about an hour and a half on that clock, steadily getting the strike work more into alignment, then bending one  of the lifting pieces just that soupcon too far (don't know why I'm using French terms - just to annoy the German clocks probably- and we'd be back to square one - most uncooperative it was being, and I was thoroughly frustrated by the time  Ann called me up to supper.  Given that these clocks are largely made of wood, I suppose the survival rate is surprisingly high. In fact, if many of them behaved like the one I was competing with this afternoon, then the survival rate is astonishing! I think a great many clockies who were tried as high as I was would have placed the clock in the middle of the workshop floor and got his revenge by jumping up and down on it!!!!!
Oh well. Thank you for listening. I feel better for a quick rant!
And of course for a good supper followed by a good game of scrabble.
Goodnight all.
Posted by Unknown at 21:31

Rog -if there is then
(a) I've missed something, and must have a closer look.

And (b) That bird must be egg bound-it's giving no sign of life or activity..

And (c) and seriously, the clock in the middle is the first type on which cuckoos (well, wooden ones) were first produced to any extent, so you're right in a way.

Who knew horology could be so stressful?

The one that caused all the trouble is rather pretty. Have you forgiven it yet?

The problem with horology, Liz, is that one is always working against the clock...........
The one that caused the problem is now ticking away and keeping quite good time, but there's still a slight problem on the strike. I must keep trying. Time will tell..... (oh dear, oh dear).