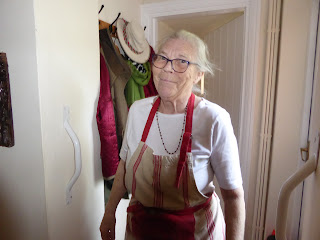 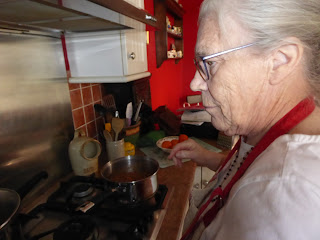 Above two pictures are (of course) of Ann, about her housewifely duties. Yesterday two of our neices , Elizabeth and Rebeccah, came over and had lunch  with us.  It was lovely to see them. Ann gave them mushroom soup (with home made bread) followed by a peach  pavlova - a light lunch to drool over. I am reminded of that old (and very true  saying) that the way to an old man's heart is through his tummy.

Spent this  morning working on a clock jack that I've been restoring  lately. It's been kicking about my workshop in a very fragmentary state for some  years. Once it's reasonably  complete I'll  probably  take its photograph for a blog entry. Don't think  I'll sell it  though. It will never be complete enough to be a particularly desirable collector's  item.  Might be a good advert though for my restoratory skills, but probably not as I've retired now (of course).  We've got two lovely early clockjacks in Suffolk  Churches - Southwold and Blythburgh.They've both  lost their clocks, but both are used to ring in the start of services (and are well worth a look at).  I suppose the  one I've been restoring ought to be known as 'Jack Horner'  ?
Posted by Mike at 15:51

Hello Mike, lovely to chat with Ann on the phone this morning. I said I'd look up the proper title of the rubber broom that's useful for wood and laminate floors, and it's called ... a rubber broom! I bought mine on Amazon.

I've got an auction next week, the usual Lowestoft china. Once that's behind us, I've threatened to come and take you both out to lunch. Love from Zoe and Tim xx