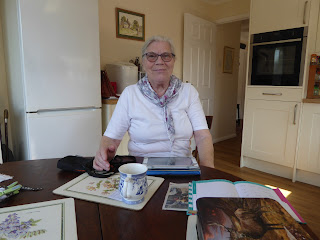 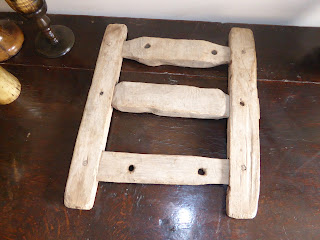 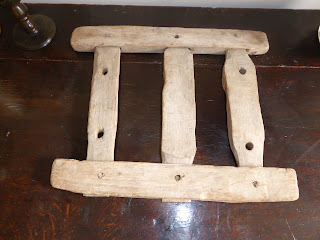 Going to leave this for a day or so now - so that everyone can have a guess (probably a soppy one- mine would have been, only I've seen them before, and happen to know what they are - tee hee !!!)  No guesses allowed by my senior  daughter, as she's having lunch with us today, and I've shown her the item and told her what it is. 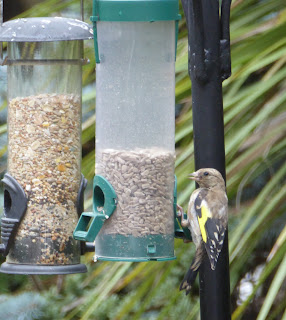 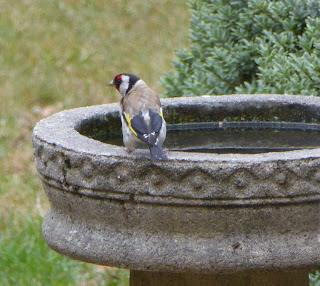 Took the photo of the goldfinch on the birdbath a day or so ago. Isn't he a little beauty?
Posted by Mike at 14:20 1 comment: 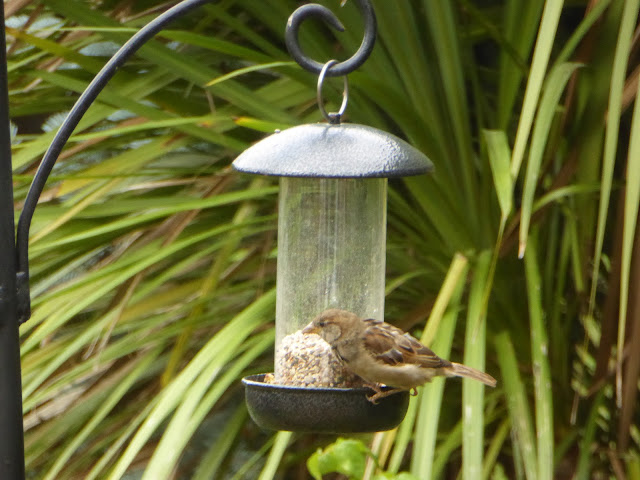 Young tree sparrow (I think).  Son  Jonathon has very kindly spent the day with us, terminating it by doing his usual  trick of forcing the computer to return to its duties (by magic of course). I think the above photo is of a young tree sparrow (but don't put any serious bets  on this, because I'm not sure). 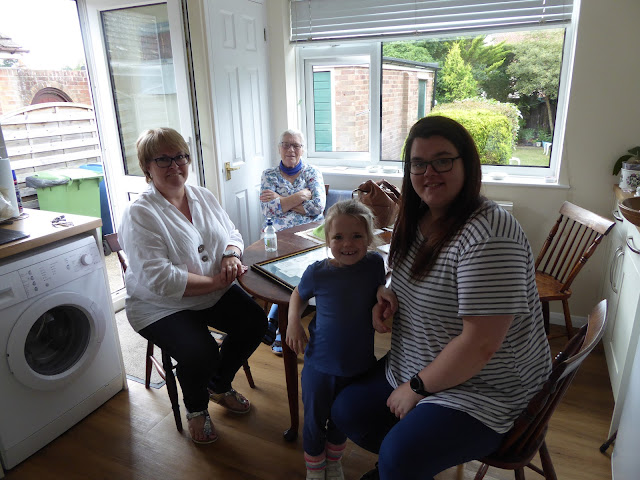 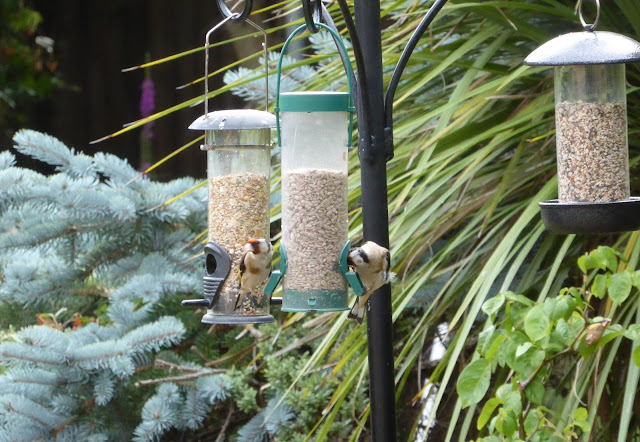 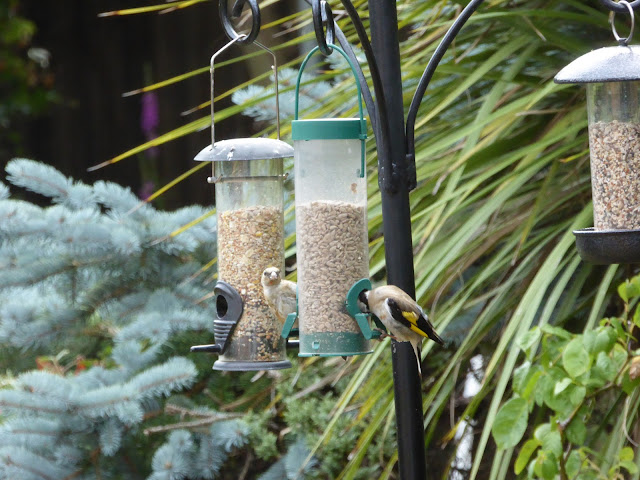 This one shows a young green finch (left) and a goldfinch. 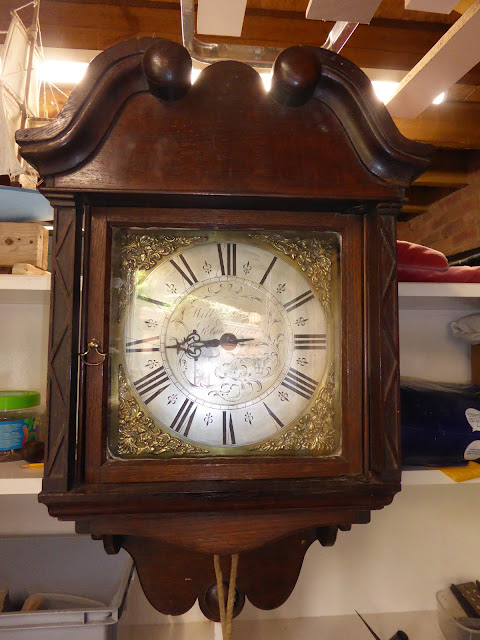 Just been clearing out the garage and found the above illustrated  single handed wall clock- got a good deal of character and a ten inch dial, of mid eighteenth date. Some work to be done on it, but could do with the odd job to be done - still, I do like having the odd job in hand. 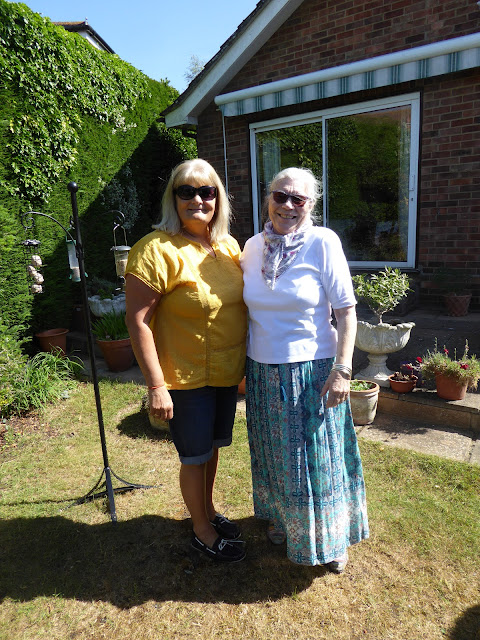 Ann, in garden with friend Sue. 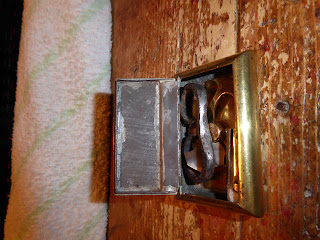 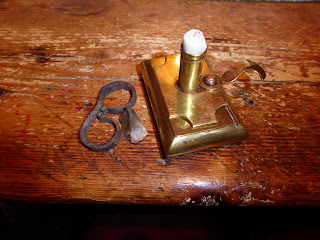 Both these are photographs of the same item - a Mystery Object, made mainly of brass.  Please give the object's purpose, rough date and location of manufacture.
Posted by Mike at 15:01 4 comments: 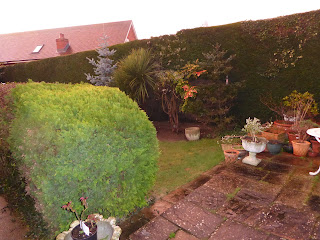 Snapshot of part of  back garden. Garden contains largely shrubs and trees. Still, it should be interesting to see what's in it as the year rolls round. 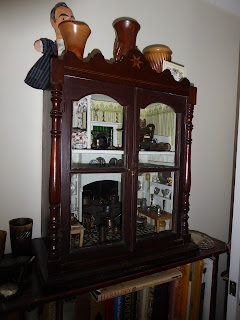 I think most of you will have seen this. It's Ann's English version of a Nuremberg kitchen. It;s becoming rather crowded, but I think this type of toy probably looks better for being a bit squashed. You'll have to embiggen it to see it well.
Posted by Mike at 20:45 2 comments: 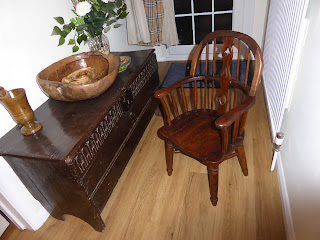 Front Hall of (fairly) new home. The child's windsor chair to the right of the picture, belongs to grand daughter Lucy, and is the first restoration job I did after we moved in here last December. Sarah drove over here this morning and ran Ann into Ipswich Hospital this morning for her eye injection. Sarah has spent the day with us, and just started her long drive home to Milton Keynes. Hope she remembers to phones us when she gets home (she usually does).Been a good day. 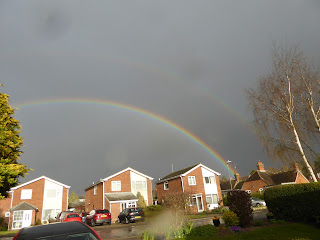 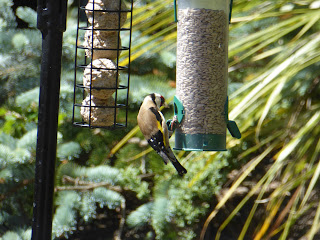 Goldfnch feasting. in garden.
Posted by Mike at 12:47 1 comment: 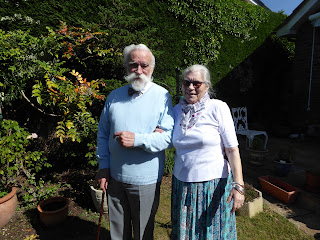 Ann and meself in our 'new'  back garden. 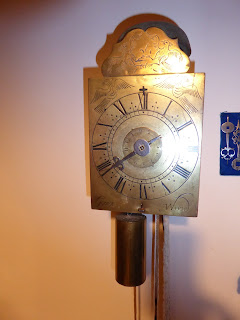 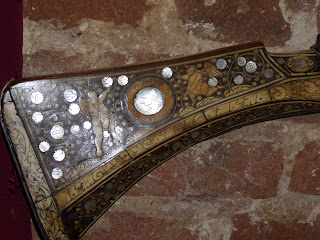 formerly in my gun collection - sold via Sotheby's last December.

What a weird world we seem to be living in at present. The whole town seems to be something of a 'ghost town ' now. Earler this week, walking across the market place, there was ONE car parked  in the town centre.   Glad we saw it. In  a few years time we shan't believe it.  Must knock off. Ann's calling me from  the kitchen  to lunch.

Speaking of Ann -must record that yesterday (for the second time since we've all been under house arrest, Ann has cut my hair,  and trimmed my beard- no barbers are open in town, so (all bar the moustache, though) Ann did the job, adding to her wifely skills, and I must stress that she aint at all a bad tonsorial artist !!!!!!!!!!!!!
Posted by Mike at 16:13 5 comments:

Our Great Grand daughter Astrid who is now five, was helping  her mother Amelia by counting her grey hairs among the chestnut ones. After a while she announced :-  "I've reached eighteen grey ones, and I'm not going to  count any more - I'll be here all day! 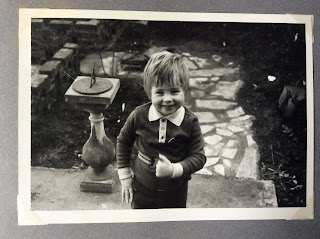 Neither of the above photographs is of a horse. We have now changed the subject (pro tem - might go back to it. We'll see.)  The above photie is of our son, Jonathan.  Ruth who is on her 'phone to me from Sweden, is correcting as we go along. Jon (who will be fifty tomorrow) was about two when this photo was taken. We lived in Ipswich at the time, with a back garden that ran down to the river. 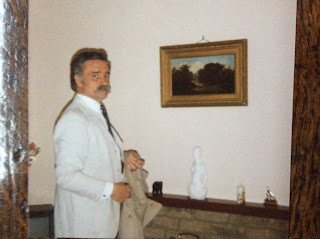 The above photo was taken, I'm told in 1992. We were living  in Burwell (a Cambridgeshire village) at the time.
Posted by Mike at 11:32 3 comments: 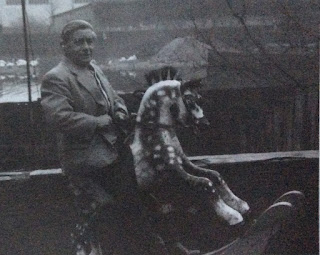 Another Horner horse.  The elderly gentleman riding him is my late maternal grandfather, Harry Oliver Trower.  We first saw Cloppy in a junk yard at Billingford (Norfolk / Suffolk borders). He was on top of a pile of junk in an open front. ed barn.

All the children instantly fell in love wioth Cloppy. One of the major parts of my fatherly duties was, of course, pointing out difficulties, and one of the major ones here was that two adults, five children, and a large economy sized dog , of the English setter breed and the usual character for this breed (bounding but thoroughly good natured), could be fairly reckoned a carful already. The addition of a Victorian rocking horse into a medium sized family runabout made things very difficult. Ruth tried to help by suggesting that if all the children volunteered to run behind the car to get home, would I then buy the rocking horse?

Being a father who took all fatherly duties seriously, the children eventually won and Cloppy joined the family. A week or two later the Trower Great Grandparents motored over and spent a day with us. Great Grandfather Trower (as you can see) also fell heavily in love with Cloppy (he justified this by explaining that as a boy he'd had a very similar steed).. After tea, he insisted on having a serious chat with me on the subject of the value of a Victorian rocking horse in the sixties, then summoned the younger generation into the conference.

"`I know that your father has bought
Cloppy for you, BUT I know my senior grandson, and I know that when you've all left home, he'll sell this old horse at a vast profit, so bear witness that as senior man present I'm buy
ing the horse for you- and he now belongs in equal parts to all my great grandchildren present, and I get a free ride on him whenever I come and visit you". We settled up - the price I'd payed for the 'oss (£5) he insisted on paying me, and the horse now lives with Elizabeth and her children and grandchild in London, and all the family have access to him, when in London.

Grandfather Trower lived until 1975, and motored over for his annual ride on Cloppy until the summer of the year he died.
Posted by Nea at 10:13 3 comments: