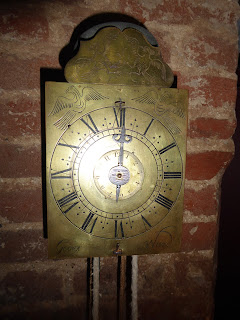 Heard recently that an  old  friend (and customer) of mine (Guy Ackers) had died.  Shortly afterwards I heard from one of  his  sons that Guy had left me a  clock. This morning Guy's  son, Jon, and his wife, Ann, called to  deliver the clock (pictured above) and stayed about an hour, coffeeing and chatting. Jon is very like his father - and that is  a  compliment to both of  them. The clock is one  I've always liked. It is an English timepiece alarm, also fitted with a single passing strike on the  hour.  The maker's name is on the lower part of the dial. It was made in England in the early 1700's. Guy purchased it  from me about twenty years ago (or so).  It was lovely to see it again -shan't sell  it this  time - one so rarely gets a second bite of the  cherry..  It's now on my cellar wall, going well  and keeping reasonable time, as far as one can judge of a single handed clock over a few hours. At the moment I'm having thoroughly mixed feelings about it - It's lovely to have the clock again, but shall miss Guy  to talk with about  clocks.  We really must call on his widow, Gwen, soon.

Would that be one of the George Woods of Nailsworth, Mike? I understand there were a few generations of clockies from different generations of that family.

Thanks forthe suggestion, Carl.The problem is not of finding a clockmaker called George Woods- there are dozens- but of finding one of the right period (late 17th/early 18th century). Preferably a George Woods known to have an interest in the sport of cock fighting (there is a cockfighting scene engraved on the upper dial). And also one from the right area of the country (probably, but nowhere near certainly, from the south Midlands. Actually that cuts it down nicely. The nearest probability I've found is the George Woods who was working in roughly the right area in the year 1700.

Yes; I shall value it.

Only four days to Sunset-Strip Mike. If I'm not being previous, I congratulate you on your endurance which I suspect is largely dependant on Annie's efforts to keep you safe, well-fed and comfortable. Jude and I send you both our kindliest wishes and boundless affection. We regret being unable to visit with you but we simply can't manage the journey anymore. {Hic transit gloria mundi!}

Having had the clock for about three weeks, I'm happy to be able to report that for a single hander, it's an excellent (and reliable) timekeeper. We're going to have to find a good place for it when we move to a bungalow.